skip to main | skip to sidebar

It's a winter wonderland and I was caught away from home for a couple of days longer than I planned, but I made the best of my time and accomplished some potholders that I must say, I love. I was tempted to make another set and keep these, but *sigh* they are promised to a lovely lady in Texas. In case she reads this, I came home to your package stuffed in my mailbox so tight that I couldn't get it out. I had to tear it.
GORGEOUS. I love them! I hope you love yours as well.
To everyone expecting clothes, blankets, etc.... you should be getting them soon.
Posted by Melanie at 2:57 AM 0 comments

Labels: crocheted potholders for a swap. Turned out great

Curse of the Hidden Camera

My children believe in torture and they administer it by stealing my camera on a frequent basis. I think it's a curse. No matter where I put it, they find it. If I put it somewhere really hard to find, I forget what I did with it.
I had it in the afternoon, took some bad pictures and set it next to my computer. By evening, I was pulling the house apart looking for it. It's BRIGHT RED. I thought hey, that's a color that's easy to see when looking through a jumble of things&stuff for my Amazing Migrating Camera. Nope.
I've found a rolling pin cover and pasty cloth set, a tomato slicer ( I had to look it up to learn what it really was) several keys, my lost G hook and the dog collar and leash that has been in Poof-It's-Gone Land since the beginning of spring. But no camera.
It's a cheapy as far as digital cameras go, only $90. But we don't HAVE $90 to lose! To add a little extra something to the general suckiness, we got our replacement cards for the camera and camera phone in the mail today. The only thing that left our house was the garbage, it went out hours before I realized the camera was missing so I am crossing all of my crossables that it's not been deposited in there by a misguided but well meaning 14 month old boy.
I have wished to take pictures of the two afghans I made, Rupert and his sister, the Spring Breeze 'ghan. I made a sweater, skirt, two hats and half finished pair of mittens for a little girl and they are sitting on my table begging me to take a picture. I made two sets of potholders and trivets, too.... I never thought I would be so crazy over it, but I am. WHERE IS MY CAMERA!?!?!?
Posted by Melanie at 2:17 AM 1 comments

Labels: My kids stole my poor little camera and I miss it's shiny red face

Soap, sweater, and blankets Oh My.

I finished up the crochet toys and needed a little break from such small work, so enter: Rupert. Only, he's getting heavy and uncooperative and after all the little work my hands aren't at their best. Moving on to medium work... a child's sweater and skirt and hat. It went together in two nights, not done yet because I still need to add some flowers, but done enough for a picture.
Sadly, one of my sons made off with my camera AGAIN. Pictures will come as soon as it is found.
Edited To Add : I must have been even more tired than I thought when I posted this. I forgot about the soap! I used a recipe that I was told about by a friend on Granola Chicks and it worked beautifully this time. No growing or overflowing anywhere, yay me! The soap I used is white and I had a couple of old gallon milk jugs handy.... so I was forced to label them with a Sharpie. My children read the word SOAP on the side and still ask me why the milk is in the laundry room. Sigh.
Posted by Melanie at 4:21 PM 0 comments

Labels: I actually made the soap right, special of me. Rupert getting uncooperative.

Tell me about the bunnies George.

I was searching the web for a realistic looking rabbit pattern - sad lack of them, by the way - and I found a simple and cuddly looking bunny pattern with no features. I thought 'aw, cute' and then moved on. It kept popping up on different site and links and I finally realized, wait, this says it was made from a square? What?
NOW I was intrigued. A round bunny from a square.. I set to work.

2 hours and many many abortive attempts later, I remembered I was bad at knitting. So I crocheted the square instead and followed the diagram. It's so stinking cute! as long as you don't turn it upside down. From underneath it manages to look a lot like... well. Uh, hrmph. You understand, right?

I know, I know, you all worried so about me when I was gone forever. Or a couple weeks. Or even a day. It's because I am wonderful and you love me.
Really, it's bee a fun and festive combination of
a)travel. Lots of that, my butt will never have feeling again and I never knew how much I would miss my own bed. When you stay in other people's houses there is an assumption that you did so because you do not value privacy in the least.
b)being sick. It's from the travel. It's no surprise travel agents don't make a point of warning people about illnesses. "Come book a trip with Fun-Time Travel today, you can be sick as a dog in no time!" is just a sucky jingle.
c)crocheting like a crazy person. And by that I mean not only that I crocheted Crazy, the green finger puppet. I made SO much stuff in an attempt to get my last minute stuff done before the true last minute.

Here is a picture of a few things I have made for one person. Since this "person" (you know who you are) will likely see this, I want to stress this is not all. Just the stuff I had sitting on the washer to keep away from my own kids. 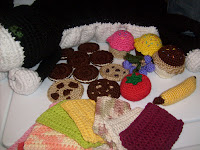 My fingers are actually bruised. The tips are sore at night when I lay the yarn down and swollen in the morning when I pick it back up. good news though, I finally have all of the yarn coming that I need to finish off the blankets!!!! I never thought I'd get it all. Then again, who knew they would discontinue it right after I got a 1/4 of what I needed? But it's on it's way, we're good.
Posted by Melanie at 2:00 PM 1 comments

Labels: but I am home and feeling better., Crochet can hurt
Newer Posts Older Posts Home
Subscribe to: Posts (Atom)